entries locked for the sake of security. comment to be added if you want to friend me~
(uhh..sadly though, I don't add people whom I don't know personally or have talked to.)

- all-around sadist and pessimist
- NUTELLA and coffee lover
- anime fan. WHAT ELSE?
- singer. I die before I dance~
- Political Science student and proud of it.

So many fandoms. I can't stick to a particular one (⌐■_■)

- I am a counselor. Approach me if help.
- I am forever and legally married to Reiji Sakamaki of Diabolik Lovers~
- I am Kyouko Sakura of the entire LiveJournal.
- I am and will always be Lacie Baskerville from Pandora Hearts. 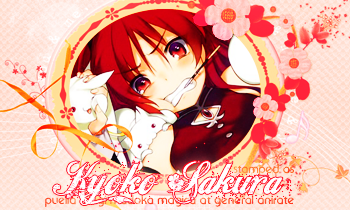 For the nth time I'm really, really sorry!! XD Time goes by so fast and yes, ignoring is a serious problem on me nowadays. Yes, I tend to ignore things, and that's why you'll always hear me apologize. It's been two months! I don't know what kind of gap came to me and I actually didn't have time to do any updates on stuff. Haha ~ Apparently I now have a WordPress account that I use for blogging about anime/otoge stuff :3

Also the reason I ignore my blogs is because of Twitter. YOU CAN PROBABLY SEE WHY I'M SO ACTIVE THERE. XD

Now, moving on. Happy Chinese New Year to all! This year is the Year of the Snake. Better not give in to temptations 'kay? That's really awful. (but I happened to be tempted a while back too. XD It's unavoidable I guess.) For the current stuff this year I'll let you in on some events that had majestically unfolded /o/

RejetFes 2013. Well, as we all know I am obviously a Rejet fan and this event last February 17 didn't come so easy. Those sudden wave of otome game announcements came really, REALLY FAST. Look at that-TinyxMachinegun, Ken ga Kimi, DotKareshi, Diabolik Lovers and a few more! Speaking of Diabolik Lovers, they had just announced an anime adaptation. I MEAN WHAT. I couldn't (and everyone else) believe it. Did time really fly by this fast? XD Only thing is, I hope the anime will not disappoint us. And the plot won't ever change. Because I won't easily forgive |D

Life as a college student. It's extremely normal I didn't even realize 2nd semester will be ending soon. Yes, soon, as in within March. I hope to live my life in the fullest during the summer, but well maybe not, considering that some otome games will be out within April-June. XD Being an otoge fan is suffering, and yes, it is serious business. We don't take otoge stuff like a piece of cake...that's a message for fans who hasn't been in the otoge TL of Twitter yet. :))

I guess that's about all. I really can't remember anything anymore, either time has eaten them all away or I've completely forgotten. XD

See you all next update~ 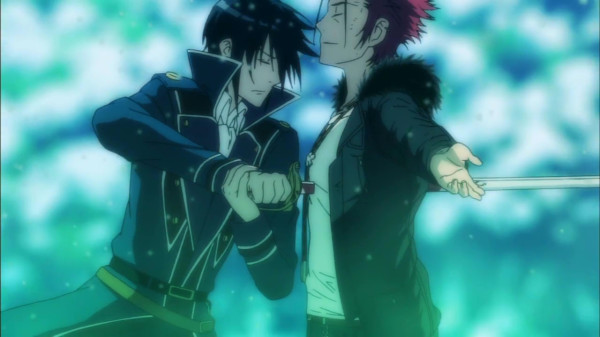 For four months of excessive fangirling and the sleepless Thursday nights just to wait for every episode, K finally comes to a dramatic close.「これで終わりだ」, as I would properly say it. This series has seriously stolen my heart and my soul. The moment I watched the raws earlier, I felt my heart break like a glass (no Glass Heart Princess pun here pls ww)...because the people that we knew were going to die actually died right on the spot. And it hurts, really. ; u ;

Shiro's death was half the impact on me. He was doing his best as the Silver King! I salute you so much, Shiro/Adolf, for being that kind of hero who wants to end the conflict by sacrificing yourself in the process. And because the Colorless King possessed him, he had no choice but to ask Mikoto to kill him. That stab on the chest. Why. の方法は死ぬために彼は尋ねたかもしれない but no, Mikoto was too persistent azdfsgfsxfh ; A ;

Second, and the most impact of all...Mikoto's death. In the hands of his very own friend. If I am going to elaborate more on this, but I can just leave that to the Tumblr post I made just a few hours ago. Mikoto is finally free and he is never going to be bound by the chains and ideals of a King, and he is obviously thankful for Munakata for setting him free. Munakata on the other hand was evidently devastated (even though he didn't want to show it) His「私はあなたを保存したい」was so heartbreaking and the way he said it even crushed me ; A ;

The Sword of Damocles rushing down to kill the Red King but NO, Munakata chose to end that life by his own choice. He stabbed his friend, and the latter said his farewells. I asked myself, why did it ever come to this....Mikoto only wanted to be away from all this chaos, he didn't want to be a King (like he said in one of the flashbacks), he just became like that. Munakata wanted to end that responsibility, and it was beautifully executed, it kept me and the entire K fandom of Tumblr into a tsunami of tears and feels. 私はまだ奇跡があるだろうと信じています。

Anna screaming Mikoto's name totally broke me. And even seeing Yata-chan cry is not helping. ; _ ; これ以上、これ以上、これ以上ない

Kuroh and Neko are alone in the world now, as the Silver King's only Clansmen. But I know Shiro/Adolf is watching them from afar. He is happily watching them, keeping them from whatever harm that may come.
HOMRA....even without your King, we know you can live on. Izumo-san can be the next King, all right? 8Dc (and that would give me tons of ideas, I tell you. TONS. Hahahaha~
I will never, ever forget K Project. Even if it has a sequel underway, the fandom should stand strong and stay positive. Every time I will hear the OST, the opening theme or the insert songs, it will always remind me of the days I had gushed over this series every Thursday night.  And for that, I bow down and say my kudos to GoRA and GoHands for making such a beautiful series. 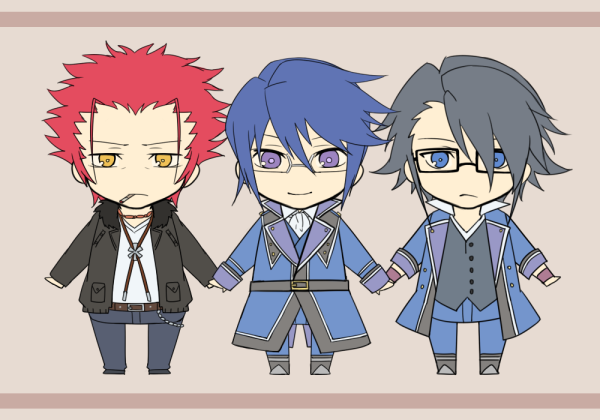 久しぶり〜！(@￣∇￣@)/ For me I might be only a day ahead but to other people there it's merely Christmas for them so happy holidays/メリクリ to you guys! :) As usual I am your busybody and like before I am more of a Twitter-influenced person. But that doesn't mean I have neglected my priority to post here and share all the happenings as life goes 8D

Of course I do have the sincere right to apologize for the utterly long delay of things. I may have forgotten this but it never went away from my mind that my LiveJournal still exists. It exists for the sake of witnessing my life experiences. XDD (ahhh okay okay enough of the serious talk here w w w)

I don't really want to do any list of happenings but I'd be more honored to share what had transpired these past few weeks, or rather months ~ あなた自身を準備する(￣▼￣)ノ＿彡

I've already begun playing DiaLovers like, October second week if I'm not mistaken XD Gundamnit those dialogues, さすが Rejet fufu...and because it's Cero-C, the amount of Kanji is quite escalated. Yeah it's not on a normal count, especially during Shuu and Reiji's routes. XD Speaking more of DiaLovers, the CDs were not even enough to satiate my obsessive fangirling /BRICKED |D あなたは私にこれを行うどうして (ﾉ∇･､) I've been endlessly listening to the [JEALOUSY o tomenaide!] track especially...Reiji-sama's...track. AZDGZDGAZDG WHYYYY ARE YOU EVEN MY HUSBANDO. WHY. 望した w w w Also Versus 3. I died so many times repeating the 8th track just for translations. AND EVEN THE TRANSLATIONS DON'T HELP. o////o

Not to mention I found the DiaLovers Visual Fanbook on Sina Weibo last week and me and my friends on Twitter tried to decode the password from it. Hint was [older brother's fear + Christa's nickname + the date of the first edition's release] //gives self a youtried sticker for the last hint 8D;;; ごめんごめん With all these DiaLov feels I might prompt myself to change my LJ layout. I'LLTRYTHOUGHBECAUSEIAMNOTREADY. w w

I've also downloaded Black Wolves Saga ~Last Hope~ just last week and I'm already going to start on Mejojo's route. PLEASE, GUYS DON'T EVER BELIEVE WHAT REJET SAID IT BEING A HAPPY GAME. NO. IT'S FAR WORSE THAN BLOODY NIGHTMARE AND WHAT-HAVE-YOU. CERO FKN D I TELL U. ;;;;; u ;;;;; めんどくさい YourHappyEndingIsALie w w Afterwards I am aiming to play Glass Heart Princess (because Shinnosuke and Yukito ♥) and continue Amnesia Later (BECAUSE the anime's going to be first priority on January too fufufufu)

Hmm what else..oh~ Chuunibyou/Chuu2Koi. Yep I found myself following that series right after episode 6 aired. AND I WAS REALLY HOOKED! HAHAHAHA. XDDD I can't believe I actually realize I have this kind of disease. Otoge fangirling is a mere example of being a chuunibyou :3 I always say the battle line whenever I feel like it 8Dc 「この現実を爆発。ズタズタにそれを破裂する。追放...この世界！」Although the last two should be in Katakana or smth www I rather have my own version, simply 「我々はすべての求めるところを、この現実を廃止しろ！追放...この世界！」because I feel destroying the RL sometimes pffft~ KyoAni is awesome enough to develop this series, from the comedy moments to the dramatic ones. \o/ I was speechless at the ending, to be precise ~

Lastly, the highlight anime of the year for me and my current obsession alongside Diabolik Lovers and other bunch of stuff...K Project/Project K!! YES SERIOUSLY YOU DO NOT KNOW HOW MANY TIMES HAVE I SCREAMED A LOT JUST WAITING FOR THE NEW EPISODE EVERY FRIDAY MIDNIGHT. THIS SERIES IS FULL OF FEELS. Plus unwavering OTP here and there I COULD NOT CONTAIN THEM. :)) All those fanfics and fanarts WHYYYYYY. 私はこれを見て後悔していない very awesome series, VERY VERY AWESOME. Lay down all the faults and shortcomings of this anime it's still perfect. And yes I am merely saying this just to prevent myself from fangirling about the Blue King,  who is my current bias ♥ Tomorrow's going to be the last episode so....//prepares a box of tissue beside her 念のため (″ロ゛)

I hope I can remind myself to post a short review/summary for K Project final episode on Friday. 8D I HOPE I CAN REMEMBER. :3c (whoops, that Sugita character I like from NORN9 was sooo much of a coincidence because Sugita also voiced the Blue King, Munakata Reisi ♥)

Right now, it's just me, the Tumblr fandoms and this Twitter account. Nothing much, unless I try to motivate myself to finish those two fics I've been typing endlessly on my phone. w w It's been there for days now LMAOOOO wwww Soon it will be New Year, and time for resolutions and whatevers again. My resolution for next year? Maybe try to be more active here. :))) これを行うことができます！\o/

That's all folks!
See you on Friday! (o≧▽≦)ゝ
Collapse